We aim to try to take at least one or two of our dogs with us when we head out.  However, to take all of them would be complete chaos!  Here are some brief bio’s on each dog.

Dolly is a German Shorthaired Pointer Cross.  I liberated her in 2005 from 2 scruffy urchins, who were dragging her around a local agricultural show on the end of a piece of bailing twine, trying to sell her to anyone who’d give them a tenner.   It was the hottest day of the year, Dolly was roughly 3-4 months old and she looked extremely scared and distressed.  I gave the urchins an earful instead of the tenner they hoped for, and I took her home.  My intention was to worm her, vaccinate her, microchip her and rehome her.  The latter part of that plan didn’t happen. She is ridiculously photogenic, but rarely sits still long enough for a decent shot.  She has bottomless stamina and it is simply not possible to make her tired.  Favourite pastimes would include running and eating, and carrying socks around. 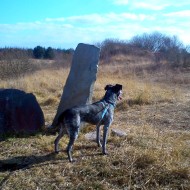 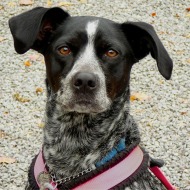 Monty is a Jack Russell terrier.  He thinks he runs this joint, and that he’s the ruftiest, toughtiest savage hunter that ever lived.  Meanwhile, whilst he’s (loudly) hunting in the hedgerows and undergrowth and barking at the top of his lungs if so much as a blade of grass or fallen leaf twitches in front of him…his sister, using her (silent) stealth tactics, is far more efficient at that game than he has ever been and ever will be!
Favourite pastimes include hoarding ALL the dog toys, regardless of whether he wants to play with them or not, and his favourite TV advert is the Specsavers ad, with the sheep and hand-sheared collie.  Just hearing the opening notes of the advert can rouse him out of the deepest sleep, into a bristling ball of apoplectic barking. 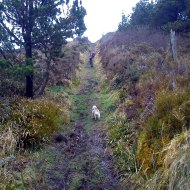 March 2013 – Devil’s Bit Mountain – Freaking out at the Grotto 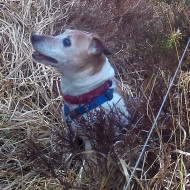 Millie is Monty’s full sister.  As puppies they were a terrible twosome, and even now, they cannot both be trusted off-lead together.  They look at each other, they look back at you, they look at each other again, something seems to pass between them telepathically…and then they bolt. Millie is an incredibly efficient mouse-hound.  Whilst her brother is making a complete song and dance about the activity and shouting about it to all and sundry, she just moves in and gets on with the job at hand.  She has a very strong mothering instinct, and in her younger years she helped me to successfully raise several ‘foster’ puppies for local dog rescues, the youngest of these pups coming to us at less than a day old.
Favourite pastimes involve having a morning lap, mine usually whilst I drink my coffee, and also trying to find the most disgusting thing she can to roll in whilst out on walks. 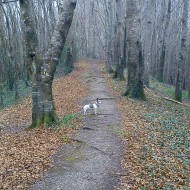 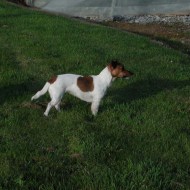 Dee is a Border Collie cross, and is unlikely to join on us on many days out.  She’s not as young as she used to be, and her old joints are getting creakier.  Her head and heart are very willing though.  She loves to come camping with us, and whilst not so fond of other dogs (outside of our own ‘pack’) she just LOVES people, especially if they are petting her!
I found an emaciated dog one day, with an old bit of rope around its neck.  The dog weighed almost nothing and was in a dreadful state.  The local dog rescue was full to bursting, and they told me to take her to the local pound.  Well, Irish dog pounds aren’t nice.  There’s a 5-day kill policy, and border collies are ten-a-penny in rural Ireland.  Not a hope that I was taking her there.  So, here she is, still with us 10 years later.  After notifying the county dog warden, under Irish law, she legally became our dog after one year and one day after I found her.  She may come on the odd walk with us, if the terrain, distance and weather are suited, and she’ll definitely be coming on our camping trips! 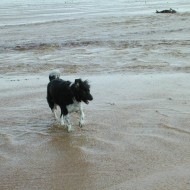 An honorary mention for Bertha (AKA Boo), if I may.  Millie’s daughter, who died unexpectedly in the night on Christmas Eve 2012.  She was Dolly’s partner in crime and those two were completely inseparable.  She loved romping about in the Irish countryside, and had almost the same bottomless stamina that we’ve found in Dolly.  She would have absolutely been in her element, joining me as I rediscover my walking legs. 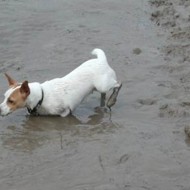 7 thoughts on “The Canine Companions”